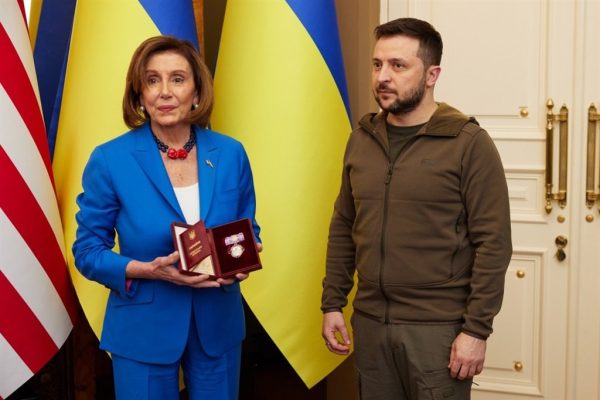 US speaker Nancy Pelosi has urged Ukraine not to be bullied by bullies.Pelosi is the most senior US official to visit the Ukraine to date.Last week, US President Joe Biden proposed a huge $33-billion package for arming and supporting Ukraine.

US Speaker of the House Nancy Pelosi urged Ukraine not to back down in the face of “bullies” like Russia on Sunday following a surprise weekend visit to Kyiv.

“Do not be bullied by bullies. If they are making threats, you cannot back down. That’s my view of it,” she told a news conference in the Polish city of Rzeszow, a day after talks in the Ukrainian capital with President Volodymyr Zelensky.

“We are here for the fight and you cannot fold to a bully.”

Her unannounced trip to Kyiv made her the most senior US official to visit the Ukrainian capital to date, following visits by US Secretary of State Antony Blinken and US Defence Secretary Lloyd Austin last month.

“We are visiting you to say thank you for your fight for freedom… Our commitment is to be there for you until the fight is done,” Pelosi told Zelensky when they met, footage of which was released by his office.

In a tweet, Zelensky thanked the United States “for helping protect the sovereignty and territorial integrity of our state” and for “leading strong support for Ukraine in its fight against Russian aggression”.

Pelosi told the news conference their talks had focused on “security, humanitarian assistance, economic assistance and eventually rebuilding when victory is won”.

“We leave with a firmer understanding and more current understanding of what needs to be done, with a deeper appreciation and inspiration from those who are in the fight,” she said.

Representative Jason Crow, a military veteran and House Intelligence Committee member, said it was essential the Ukrainians “have what they need to win”.

He said he had come to Ukraine with three areas of focus – “weapons, weapons and weapons”.

The nature of the war was evolving, with the conflict shifting from the north to the south and the east, which involved much more open terrain and a shift in terms of weaponry needs, said Crow, who is also on the House Armed Services Committee.

“You’re more likely to see long-range rocket fire, long-range artillery fire, the use of armoured personnel carriers to move troops, tank formations, as opposed to the smaller ambushes and unconventional tactics that we saw in the early stages of this war,” he said.

“So the next phase of our support is starting to look like that too. You’re starting to see artillery, longer-range fires, more advanced drones, counter-artillery radar systems, things that will help the Ukrainians better engage at further distances.”

Last week, Biden proposed a huge $33-billion package for arming and supporting Ukraine, and Pelosi said Washington was “already passing into legislation the initiatives” he had raised.

The US leader also outlined proposed new laws to allow using luxury assets stripped from Russian oligarchs to compensate Ukraine for the destruction caused by the war.