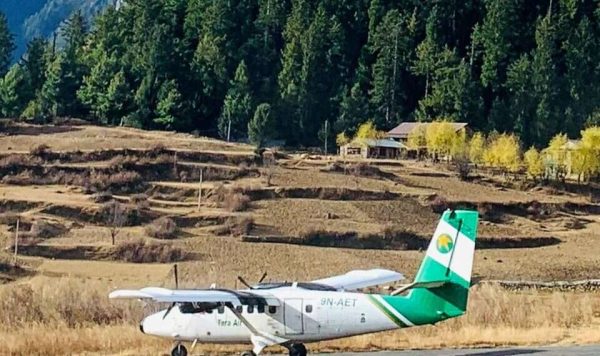 The plan had 19 passengers on board and three crew members.It took off from the western town of Pokhara for Jomsom on Sunday morning.The plane’s last known location was in an area around Ghorepani at over 2 000 metres above sea level.

Nepali rescuers scoured a remote area of the lower Himalayas by helicopter and on foot Sunday after a passenger plane with 22 people on board went missing.

Nepal’s air industry has boomed in recent years, carrying goods and people between hard-to-reach areas as well as foreign trekkers and climbers. But it has a poor safety record.

The Twin Otter aircraft operated by Tara Air took off from the western town of Pokhara for Jomsom on Sunday at 09:55 but air traffic control lost contact after 15 minutes, the airline said.

There were 19 passengers on board and three crew members, airline spokesman Sudarshan Bartaula told AFP. The passengers included two Germans and four Indians, with the remainder Nepali.

The aircraft’s last known location was in an area around Ghorepani, a village at 2 874 metres above sea level, according to the aviation authority.

The Civil Aviation Authority said that in addition to two choppers, personnel from the army, police and the Himalayan Rescue Association had been deployed to conduct search operations on foot.

“Right now we cannot say where exactly where the aircraft is and in what condition. There has not been any reporting or information from locals about a big fire or any other such indications,” said Dev Raj Subedi, a spokesman for Pokhara Airport.

“Search operations have been hampered by the weather. Three helicopters have had to return. An army helicopter is now trying to reach the area,” he told AFP as light began to fade in the region.

Jomsom is a popular trekking destination in the Himalayas about 20 minutes by plane from Pokhara, which lies 200 kilometres west of the capital Kathmandu.

Tara Air is a subsidiary of Yeti Airlines, a privately owned domestic carrier which services many remote destinations across Nepal.

It suffered its last fatal accident in 2016 on the same route when a plane with 23 on board crashed into a mountainside in Myagdi district.

Nepal’s aviation industry has long been plagued by poor safety due to insufficient training and maintenance.

The European Union has banned all Nepali airlines from its airspace over safety concerns.

The Himalayan country also has some of the world’s most remote and tricky runways, flanked by snow-capped peaks with approaches that pose a challenge even for accomplished pilots.

The weather can also change quickly in the mountains, creating treacherous flying conditions.

In March 2018, a US-Bangla Airlines plane crash-landed near Kathmandu’s notoriously difficult international airport, skidded into a football field and burst into flames.

An investigation found that the captain suffered an emotional breakdown during the flight, distracting the freshly qualified co-pilot who was at the controls when it crashed.

That accident was Nepal’s deadliest since 1992, when all 167 people aboard a Pakistan International Airlines plane died when it crashed on approach to Kathmandu airport.

In 2019 Nepal’s tourism minister Rabindra Adhikari was among seven people killed when a helicopter crashed in the country’s hilly east.

This month Nepal’s second international airport opened at Bhairahawa, aiming to give Buddhist pilgrims from across Asia access to the Buddha’s birthplace at nearby Lumbini and easing pressure on Kathmandu airport.

News24.com | Toll From Brazil Downpours Rises to 44, Another 56 Missing: Govt